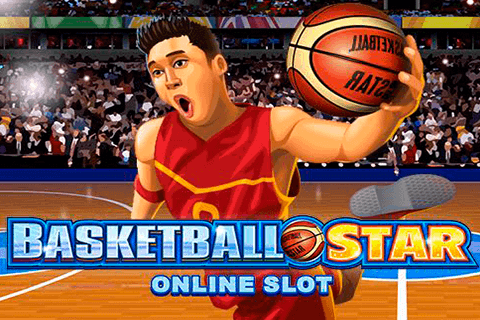 Have you ever dreamt of playing with the best basketball players in the world? Was it your biggest wish to become one of them one day? If yes, now it's time.

Basketball Star Slot is a game from Microgaming and it offers the player 5 reels with 243 ways to win. The game is full of amazing bonuses, features, unbelievable symbols, breathtaking graphics, animations, effects and people in the background cheering and shouting as it is usually at the game. If you enjoy playing basketball and you are a fan of that game, this is something you should definitely try. The good thing about this game is that the players can play it on their computers, mobile phones or tablets. You can play it in one of the Aussie friendly real money casinos.

Before you start the game by shooting hoops, you should choose the bet that you want to use. In order to do that, you should press an arrow located on the "Bet" button and then press "+" or "-" to choose the size of the coin and the number of coins that you want. If you like it, you can play with the highest bet from the very beginning by pressing "Max Bet" button. After everything is adjusted, you just have to click "Start" button to make the reels spin. There is also an option called "Autoplay" which will make your reels spin without being interrupted for a number of times.

There are different buttons in the game that we need to know in order to enjoy our basketball round:

Basketball Star Slot Review of the Symbols and Features Many symbols appear during the game, like the court, the ball of play, a drinks holder, trainers, medals etc. and they all make the gaming atmosphere. However, it is even more interesting with symbols that appear next. We can find five symbols that show us a little bit of the action on the court: a dribbling player, a guarding player, a player preparing himself for a slam dunk etc.). With them, the payouts in the game are a little bit more generous than normally with the player setting up for slam dunk paying you up to $12 if you have five matching of your reels. Each of the five symbols of players appear in a different activity in the game and they will make you play and win for the whole game. We are sure that you want to get the medal as any other winner.

In Basketball Star there are different symbols that you can hit, however, the most important one is the logo of the game which is wild. It substitutes for any other symbol appearing in the game but the special ones which give the player a higher chance to win a combo. If the cascading symbols are not forming a combo, the multiplier is just at 1x. There are more than 40 wild symbols during the whole game and they can appear stacked on 3, 4 and 5 reel. Together with the wild symbol, there is a bonus called a Wild shot that can be triggered by turning up to 2 random reels which will turn into wild symbols. However, this feature only works on the three middle reels and together with that the Rolling Reels feature is activated.

In the game, there is also a feature of free spins bonus. Here, the player can win up to 25 free spins with Rolling Reels which can make the winnings up to 10 times bigger every time the player lands on the Rolling Reels during the free spins. Finding a basketball scatter symbol in the number of 3, 4 or 5 anywhere on the 5 reels will give the player 15, 20 or 25 free spins. There is no chance of activating the bonus game in the free spins round. Scatter symbols pay $5 for matching three (from a $1 bet), $50 for matching four and $250 for matching five. When three or more are matched the Free Spins Bonus round is triggered too. During the wins with the scatter symbols, the Rolling Reels feature is not activated during the main game but during the Free Spins Bonus for extra reward. This is a really good feature as the bigger number of consecutive wins is, the bigger rewards the player will get — from 2x up to 10x multipliers. The standard number is from 2x–4x during the free spins bonus and the total win can be about 20x–40x of the total player's bet. The maximum amount that you might win is a jackpot of 120,000.

Our Verdict: What do we think?

The graphics in the Basketball Star slot is really good and together with the music playing in the background it makes you want to play it even more. The thudding of the reels makes a sound of a ball bouncing on the court. Every person who is a fan of NBA will for sure find something interesting here. If you don't really like hoops, there are other amazing features in the Basketball Star which are worth trying. As any other game from Microgaming, it is exciting and unforgetabble adventure which you will never forget.

Play this real money pokies online at our recommended casinos for Australian players and you could score a big win on Basketball Stars!