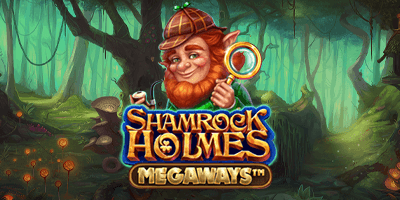 Spin the reels of the detective-themed Shamrock Holmes Megaways slot and enjoy the maximum win of up to 28,000 times your total stake per spin.

The real money pokie is based on the Irish Luck theme. The setting of the slot is awesome with enchanted forest theme and rays of sun through the treetops. The reels have a wooden theme where the icons have been beautifully engraved on the reels.

The story runs around the character called Shamrock Holmes and a leprechaun. The players will enjoy the upbeat soundtrack. When you will spin the reels of this slot, you will find several exciting symbols landing on the reels. These symbols are leprechauns, Shamrock Holmes, wooden slats, Shamrock flowers, clovers, fairies with a pot of gold coins, and the regular symbols from nines to Ace. The scatter symbol is the gold coin and the W is the wild symbol.

The wild icon only lands on the additional reel, which is located overhead of the main reel area. The wild symbols work to replace all the symbols excluding the scatter symbols. The wild symbol also participates in a respin feature.

The symbol with the highest payout is the Shamrock Holmes. It gives out a maximum of 50 times your total bet when six of their kinds appear on the reels.

The controls of the slot are available on the right side of the screen with the large spin icon for quick and easy access. Players can place a minimum bet of $0.20 and a maximum bet of $20. You could win up to 28,000 times the amount you bet in a round.

The RTP of the Shamrock Holmes Megaways slot is 96.44%, which is decent. The hit frequency is at 35.34%. This signifies that you will get a win on every third spin more or less. The slot also comes with a multiplier that increases as you activate the Rolling Reels after a win.

There are exciting bonus features in the Shamrock Holmes Megaways slot which are discussed below. Rolling Reels Feature: This feature is triggered when the players get any winning combination. The winning icons are exchanged with different symbols on the reels. This feature continues until no new winning combos are formed. It can offer several consecutive wins for each spin..

Magic Forest Re-Spin Feature: It can be activated in three different ways. When it is activated, it guarantees you several wins. To trigger the feature, the players will require three gold shamrock coin scatter symbols on the main reels.

The feature also comes with a progressive win X2 multiplier. The value of this multiplier increases by +1 with the formation of new winning combinations. Keep note that players can win big here because it is an Unlimited Win Multiplier.

The Shamrock Holmes Megaways is created with the joint venture of Microgaming and All41Studios. The theme of the slot is awesome and it includes several exciting features to make the game more entertaining. The cheerful soundtrack and overall look of the slot will make many Megaways enthusiasts happy.

Spin the reels of this interesting Shamrock Holmes Megaways slot and win big by building the multiplier in the Free Spins feature, which has no limits.