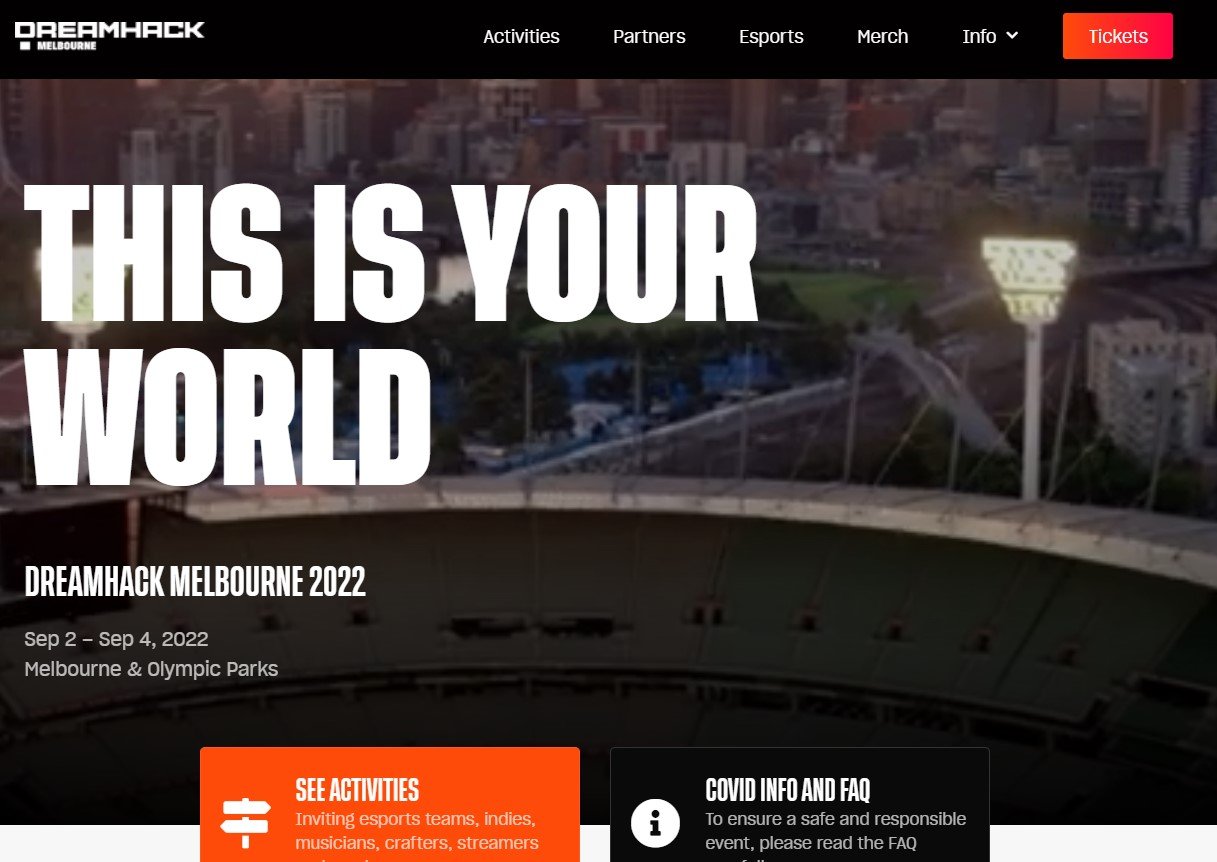 DreamHack Is a festival to celebrate all that is great in the world of esports and egaming. Guess what-Its coming to Melbourne between Sept 2 – and Sept 4, 2022.

Tickets go on sale on Thursday 7th April 2022 via the DreamHack website. It is the first time this event has come to Australia.

DreamHack is a widely known global event. They have been hosting large-scale esports and gaming lifestyle events all over the world for the past 25 years. It is often referred to as the place where the gaming community comes to life. The DreamHack brand is a part of ESL gaming, which is the world’s leading esports company.

After the last festival back in 2019, the most awaited esports festival has returned once again. The festival is being held in Australia for the very first time, later this year. The event is being presented with the support of the Victorian Government via the major event and tourism agency Visit Victoria.

In an interview with 9News Brad Baldwin, ESL Australia Senior Manager and DreamHack Melbourne organizer stated that he and the team are eager to show everything DreamHack has in store for their Australian community. He added that he sees bringing the “storied” festival to life as a special opportunity.

The When And The Where

This three-day festival will take place from Friday, 2 September to Sunday, 4 September between 10 AM and 8 PM at the Melbourne and Olympic Park. Esports and gaming fans are invited to become a part of this unforgettable experience. The Melbourne and Olympic Park is set to host tens of thousands of gamers, including some of the top esports professionals from all over the world.

Baldwin further added that he could not imagine anything more appropriate than being in Melbourne, particularly.

An Event For Everyone

The festival offers something for everyone in the family. It features activities for everyone regardless of their age. A family bonus is that kids under 6 are allowed free admission as long as they are with an adult having a valid ticket.

Baldwin opined in the interview that this is a good opportunity for the esports and gaming community in Australia to come together at large. Baldwin and his team wish for it to be a communal place for friends and families, as well as others who want to learn more about gaming. They want to honour the community that has supported gaming and esports for a long time in Australia, and Baldwin feels safe saying that everyone will enjoy their time.

Although the aim of the festival is to celebrate everything gaming, most of the attention leans towards competitive events. Attendees can win big prize money from these tournaments. Apart from these professional tournaments, DreamHack also features amateur and varsity gaming tournaments. According to Mr. Baldwin, the festival will help people feel “confident and comfortable” while playing.

Attendees will be able to experience everything a classic DreamHack Festival has to offer with the biggest range of esports and gaming content including :

Other engaging activities will include a cosplay championship, expo, panels, live music, art, screenings, showcases from the city’s top independent development studios, and other on-site gaming activities across the precinct. Guests can also buy officially licensed merchandise from the ESL shop at DreamHack Melbourne. For the attendees that prefer non-digital games, there is a tabletop section that allows them to partake in board and card games.

The tickets for DreamHack Melbourne are on sale now. We can purchase these tickets from ticketek.com.au. All the tickets are mobile-only and will be delivered to compatible smart devices. The tickets are available as single-day entry passes that cost AU$50 and Festival passes for all three days cost AU$109 for adults and AU$ 65 for kids, while a BYOC Festival Pass costs AU$155.

BYPOC cardholders will have access to all areas of the festival along with exclusive overnight admission to the BYOC LAN center at Tennis HQ across the weekend. The players need to be older than 15 in order to participate in the LAN.

To celebrate the debut of DreamHack in Australia, a limited quantity DreamHack Founders Pass has been introduced. The Founder card can be purchased for an extra AU$50 on top of the Festival pass. It consists of a locally produced VFT (Very Fungible Token), which is a physical gold-plated pin. The VFT will be shipped in a commemorative box with a personal note from the DreamHack team ahead of the event

For safety purposes, people over the age of 18 must have received two or more doses of an approved COVIS-19 vaccine to be able to attend the event. In the case of medical exemption, the attendees would need to bring valid proof.

For any queries regarding the festival, we can get help from the DreamHack Melbourne support raps and contact them through email: [email protected]. The FAQ section found at the end of the site can also help in answering most of our questions.

The aim of DreamHack Melbourne is to celebrate esports. This gaming lifestyle event is great for families as well as individuals, offering activities for everyone to partake in. This event can be a great opportunity for gamers from all over the country. With its many competitive tournaments, expos, and wide gaming range, DreamHack Melbourne is not something you want to miss out on.

It is coming to Melbourne Australia from Sept 2-4 2022