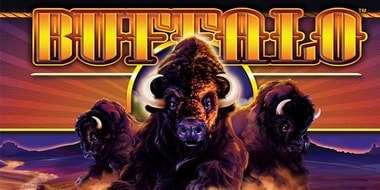 Introduced by Aristocrat, the Buffalo slot machine is an all-time favourite animal-themed game for players from around the world. It is an entertaining and fast-paced slot game where the objective is to fill their screen with Buffalo symbols. You can play for fun or play at many great casinos for real money.

The Power of Reels Buffalo belongs to Aristocrat’s Xtra Reel Power family and boasts a generous 94.58% return for players. It is a five-reel and four-row video slot that includes 1024 means to win. In this slot, you don’t choose the paylines, but the reels to play with an amount set per reel. All rewards are given from left to right and calculated in multiples by bet-per-reel excluding scatter wins.

Some of the popular icons in the game include Buffalos, Tigers, and Deer. Standard Card symbols such as Ace, King, Queen, Jack, Ten and Nine also appear in this aristocrat pokies game. The symbol that offers the best reward in this game is the Buffalo symbol. It is referred to as the stacked symbol since it can emerge several times on a single reel.

When lots of buffalo symbols appear in a winning combination on the screen, the player becomes eligible for the payout. So, try to pile them up on all reels and watch the cash come rolling in.

The wild symbol of this online pokie is the sunset symbol, and it is capable of replacing all symbols except for the scatter symbol, which in this case is a Gold Coin. It is worth noting that the sunset symbol emerges only on the reels two, three and four and not the first and the last reel.

Since the wild symbol can substitute for the primary buffalo symbol, the players can use this feature in making huge wins. The sunset symbol also acts as a win multiplier for the Free Spin feature.

Slots offer free spins to players to enhance their odds of winning. In Buffalo, players get free spins whenever there are at least three scatter symbols on the reels. The players receive 8, 15 or 20 free spins on hitting three, four and five Gold Coin scatter symbols.

These free spin games are played using the same reels and offer the same payouts to players. The extra five free spins are given to players who hit two scatter symbols during the bonus feature. In addition, the sunset wild symbol acts as a multiplier to reward players generously. Thus, if the sunset symbol also appears, it offers twice or three times the payout of a winning combination to the player.

The introduction of the Reel Power System in Buffalo offers a unique learning experience to players. It is also considered as one of the best five-reel slots for anyone with a restricted budget. You can also give it a try by playing with no deposit casino bonus that is offered by many top online gaming platforms.

Have you never played the Xtra Reel Power system before? If not, then why not sign up at your favourite online casino today and experience this exclusive feature.