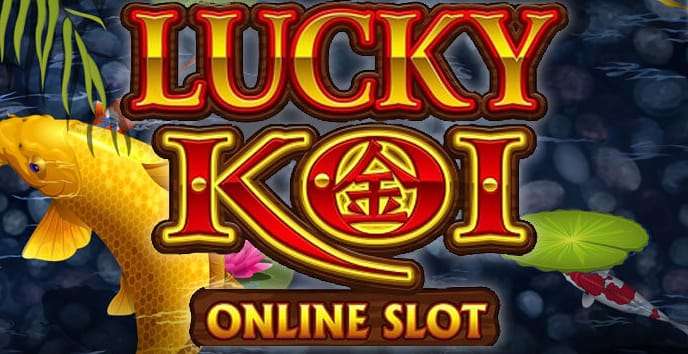 Are you interested in Japanese culture? If you like that country, we have a perfect game for you. Lucky Koi is a new video slot game produced by Microgaming whose team took the idea from the traditional Japanese philosophy of art. The koi carps are believed to bring good fortune to people who own them. That’s why if you want to buy that fish in Japan, you need to spend a lot of money as the prices are extremely high. Take a look at that unusual game, learn more about Japanese culture and Japanese beliefs. The game itself is really nice for the eye and it’s not complicated at all, however, fans of more challenging games will find something for them as well. You can read our Lucky Koi slot review and see by yourself. Sound interesting? Find your favourite place to play at the best real money online casinos.

Symbols appearing during the game are strongly connected with the theme and they look wonderful. The player can find a dragonfly, a turtle, a frog, a lotus flower, and inscribed fan, Chinese coins, ornaments in the colour of silver and gold and the amazing Koi. Join us and see how amazing they are.

How to start the adventure?

To play the game you really don’t need to much effort. After a short moment, you will notice that the screen has very similar or even the same interface as other games, so the settings are familiar as well. The game has the standard 5 reels and 3 symbol positions on each of them. There are 25 paylines going across the screen which are positions where you can have winning combinations after landing on them. The arrows are used to manage the bar below the reels to set the bet per one line before starting the reels. One click on the “Spin” button will start the game.

In this game, you will need your luck, as fans might know from other games. Each winning combination has its own value. The influence has also the wager’s size which basically means that if you want to have higher winnings, you need to bet more at the beginning. Don’t make bad decisions, think when you play and win as much as possible! Symbols in the pond

As was already said, there are many different symbols in the Lucky Koi game. Most often the player will see the dragonfly, the turtle and the frog, small creatures living in or near the pond and sitting on a lily pad. They are amazing, but they can only give you small wins. If you want more, and you probably do, you need to have as many of those symbols in one line as it’s possible. That way you can guarantee yourself some bigger amounts of money.

There are also other symbols which were not mentioned before like gold lucky charms or a lily pad. The player can get the reward of 100 times bigger than his bet with the most valuable symbols, which is, of course, the koi carps and the logo of the game. They don’t appear so often, so you need to have your eyes open.

There are also 2 extra symbols which will b e helpful to the player during the whole game and will increase his chances of winning the jackpot. The first symbol is a wild goldfish. It can substitute any of the symbols appearing in the Lucky Koi slot. If you have the winning combination or the two of them on the reels, you will win the prize. The second symbol is the Lucky Koi which is a scatter symbol. It is essential if you want to activate the features in the game and you need to have 3 or more anywhere on the reels.

What kind of game would it be if it didn’t have Free Spins? The player will get from 10 up to 30 free spins with a multiplier up to 5x for any wins. The wild symbol expands during the free spins bonus thanks to which the player can earn more. He can also activate the feature again if he has 3 more scatter symbols.

The game also invites us with its Koi Bonus Game which is something for people for whom Free Spins are not enough. The player will see 12 Koi carps swimming in the pond and he will have a chance of catching from 3 up to 6 of them. Each fish has some value and the amount will be totalled in the end.

What can we say about the game?

Lucky Koi casino slot has a really nice graphics which provides the player with animations and vivid colors. The reels are located on the top of a fish pond. In the background, we can see small rocks and lotus flowers on the water. Peace and quiet that can be noticed during the game is for sure a big advantage and lets the player focus on winning. The theme is unusual and very detailed. The game itself is a really nice proposition for people who like to see something new, have some fun, win a really good money and learn new things by playing. Microgaming presented a game that everyone will like. There are many propositions that will make you interested — find them on True Blue Casinos!

With these fish, luck is definitely on your side. Take a spin today!